Evolution of the American Kitchen

The kitchen is the hub of most American homes. Since the electrification of homes ousted the revered old woodstove, each decade since the middle of the 20th Century presented its own set of unique needs. Kitchens have evolved over the years with transformations driven by the desired function of the day. Let’s take a journey through yesteryear and explore how your 21st Century kitchen came to be. Some elements, such as The Work Triangle remain viable, while others, dated goose-themed wallpaper border, for instance, we hope never regains popularity.

One word folks: linoleum. Although this resilient floor covering was actually invented in the late 1800’s, it peaked in popularity in the U.S. in the late 1940’s and early 1950’s. This was also the decade that birthed the concept of The Work Triangle. Early 1940’s kitchens were focused on functionality and cleanliness. However, towards the late 1940’s, inspired by Hollywood glamour, even the smallest and most modest kitchens reflected gloss and glam of Tinseltown as rich fabrics and metal accents replaced humbler furnishings and appliances. 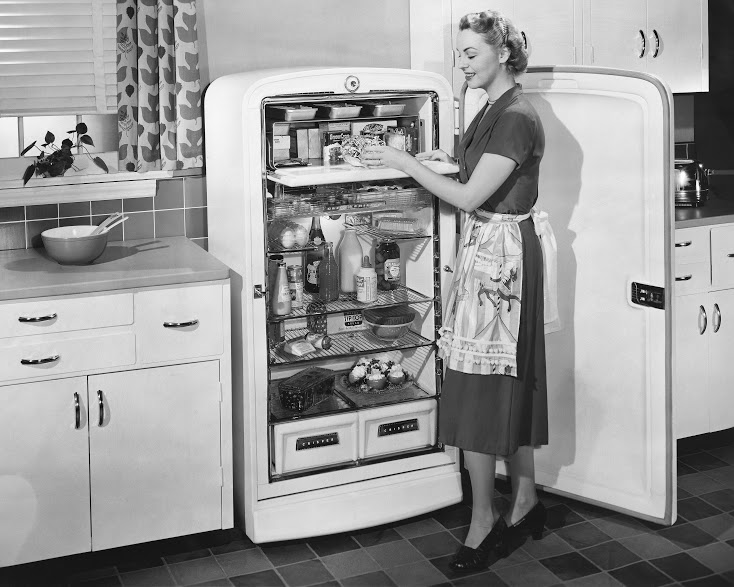 In the 1950’s, not only did the postwar white kitchen gleam, the women who worked in them were expected to sparkle, too! And ladies, what was the secret to the best homemade meal? Pearls, of course! Linoleum was still popular, but it had a less expensive vinyl competitor in the wings. It was the Atomic Age and icy pastel colors, steel cabinets, tile counter-tops, and metal banding around counter edges looked ready for takeoff at any moment.

Homeowner’s interests were beginning to scan the horizon outside the kitchen window. Time became the most valued entity in the home. The greatest kitchen invention of the 60’s? Hands down, the microwave, introduced by the Amana Company in 1967. There is no doubt that this invention will continue to be a kitchen timesaver until something better and more innovative replaces this appliance.

Things got earthy in the early 70’s. Popcorn ceilings, dark void-of-life cabinets, an abundance of avocado, orange and yellow accents . . . no wonder women of the 70’s liberated themselves right out of the kitchen! We wouldn’t want to be stuck in there either! We won’t even get into faux wood paneling. 70’s design is a prime example that one decade’s trash is another decade’s treasure. Still possessing enough function to get the job done and dinner on the table, we certainly don’t think of the 70’s as the golden age of kitchen design. Want proof? Check out an episode of House Hunters and watch in amusement as young prospective homeowners shriek in horror and faint at the sight of a kitchen even slightly resembling something out of the 1970’s. 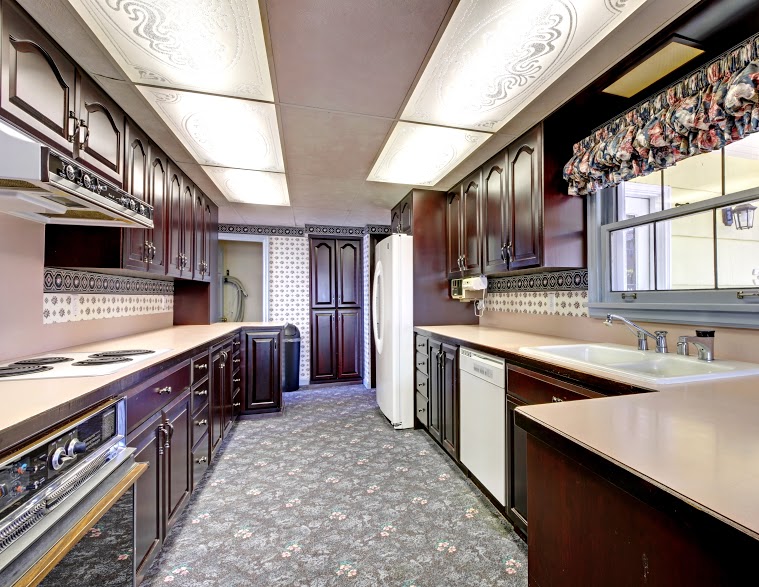 Bueller…Bueller…are you still with us? Homeowners of the 80’s ditched the dated and dreary style of the 70’s and began romancing the home. Soft hues of beige, blue and . . . mauve florals, along with swathes of lace everywhere. It was far from “mauvelous.” Wallpaper experienced a renaissance not seen since the Victorian Era.

Country style continued to be a driving design force in the 1990’s. Light oak was in use from cabinets to the reproduction farmhouse table and press-back chairs. In a back to grass roots movement, it was all about life in the country, with a cement goose on every doorstep. Apron sinks and all white kitchens also made their debut in the 90’s, features that are still popular today.

Everything was bigger in the 2000’s. Charm was out, function was in. Super-sized kitchens with equipment that rivaled those found in the haute-est of restaurants became all the rage – even for people who didn’t cook. The mantra of every house hunter was “Stainless steel appliances and granite countertops. Stainless steel appliances and granite countertops.” Stainless steel remains a popular option, although you better have your cleaning solution and cloth in your holster at all times. Stainless steel breeds fingerprints, especially with little ones around. As for granite – there are whispers that it is on its way out, to be replaced by more consumer friendly surfaces like quartz. 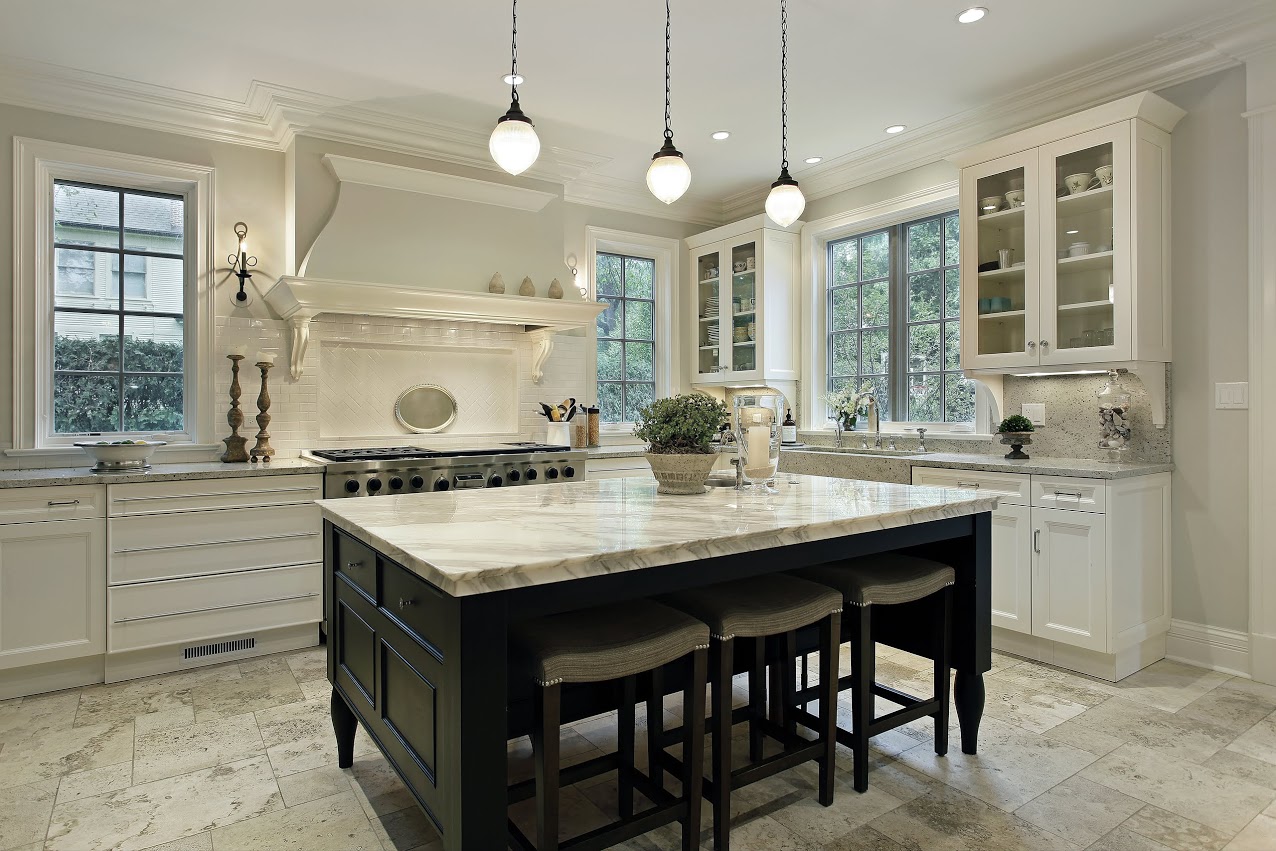 It’s 2014, and while our kitchens still contain a lot of features from the previous decade, we are predicting what design elements are being conjured for the decade ahead. Think of it like beauty and the brains. The 2010’s represent the perfect conjunction of fashion and function. We’ll see beautiful aesthetics and top of the line appliances, more advanced and efficient than ever before. Hard core surfaces – stainless steel, subway tile, hardwood flooring, are still popular, but now people are opting for slightly smaller, more intimate spaces. Previously luxurious kitchens are evolving into the hard-working, yet family friendly farmhouse kitchen and the light and airy cottage kitchen.

Over the last 70 years, trends have come and gone, some arguably stylish and others, well, we are still a little traumatized. Certain styles stick, some fade away, and others come screaming back with a vengeance. The bottom line is, if remaining current is your motive, then we hope our review helped to define what’s “hot” and what’s “not.” If you don’t give a hoot what is “in style,” and you want to create an exact replica of a 1950’s kitchen, go for it! While resale value may cause you to hesitate pursuing your nostalgic dreams, who is to say, prospective buyers may dig your retro residence. There is no one answer as to why a feature is trendy and transient. Our advice for your kitchen’s future: keep the basics of good function and from that point on – go with what you love.

Schedule a design consultation today with an MBS Designer.